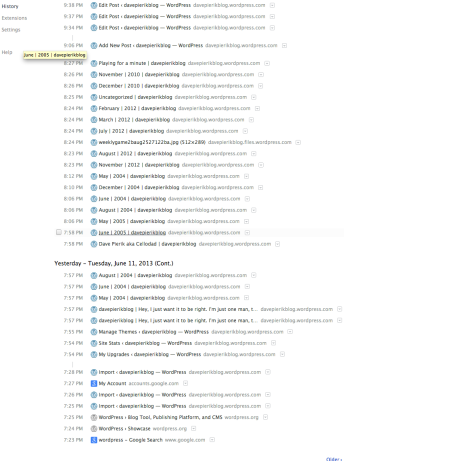 So I have been all over the web learning about the differences between WordPress, Drupal and Joomla. Starting from nowhere in a short time I have picked up a huge chunk of big picture. I’ve completely redone this blog. Below is a screen shot of what this site looked like right after I added my other blogs to it but before I reconfigured the look.

Prior to merging the other blogs onto this, it did not have the archives and it ended with about 4 basic pages, all of which were September 2012. I have just added RSS, or at least I see where and how to do that. I have added four entire large blogs with a full archive of cello events and gaming session notes dating back to 2004. 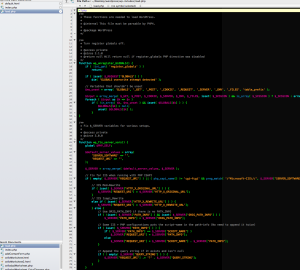 I have played with code. I have struggled with FileZilla, which I suppose makes sense as the way to plug in the plug ins, but somehow I thought it would be right there in WordPress, where I looked so long and hard for Plug-Ins. While looking there I discovered Widgets. Previously I had no idea about most if not all of this stuff, what was where or how most if not all of it worked. I found the audio player which I might come back and add later…

So today I brought over (into this WordPress blog) my previous blogs from Blogger. Most of the entries are about D&D and playing the cello. The truth is that D&D and even playing the cello are not how I spend most of my time, but they were two separate, fairly focused blogs and off and on, I was pretty good about blogging after game sessions and gigs. Funny how when you read it here it ends up looking like I’m a ridiculously fanatical gamer and cellist (well, maybe a little fanatical.) Hey, everybody needs a hobby. Or two.

Now, what had been a tiny little WordPress blog with just a couple of short entries is gigantic by comparison to what it was before.

One thing that’s interesting is that when I put them all together here I can see that (for example) there were weekends where I had a game session and a gig within a short time of each other. Everything is organized chronologically now. Nowhere else but here on this WordPress blog do I have Cellodad and D&D lumped together; they are very very different things, each of which I happen to have been doing for a long time.

Another note, in case you’re wondering why there are more D&D entries than Cellodad entries: My cello gig notes are mainly just a journal for me to keep track of what people request, what I have been playing and how things went, etc. So for that I can blog or not blog about gigs, depending on time and my mood. On the other hand, my gaming blog is a way for players who might miss a game session or two to be able to catch up with the story as we go and it works very nicely that way — so long as I promptly blog while I remember what happened during that game. I find it difficult not to read my old entries over and over, replaying some fun times.

I suppose this is as good a place as any to mention that this year I won two (2) first place (1st) WNPA advertising awards, one for Humor and one for Youth this time. Although I’ve won other awards it’s rare and difficult to win a 1st, and winning multiples does not happen often. I would like to thank the Journal’s Graphic Designer, Will Adams and my customer, Olsen’s Furniture for their roles in helping to make this happen.

Websites websites everywhere! I was looking again today at how many different blogs and websites I’ve posted and it is kind of astonishing how over the years how easily one person can end up with half a dozen or more personal websites. I’m going to put some links here, on yet another one.

I suppose there are no limits on what a person could do, especially since there are so many ways to make sites and blogs for free. Why not have a site or blog for every hobby?

My favorite music while I study is something non-distracting, preferably with no lyrics. When I’m driving I listen to pop, alternative, talk radio or sometimes jazz or classical. But when I need to concentrate, I listen to a lot of Tangerine Dream, Vangelis, Jean-Michel Jarre, that kind of thing. A lot of people are into it now but I was what you might call an early adaptor, I have this stuff on vinyl from back in the day.

I have been learning a great deal about color from my instructor, professor Renne Brock-Richmond. Beyond teaching just the technology and techniques, she is a true artist who inspires me to think and feel.

Lance’s high level campaign was very interesting Saturday. B, me (Dave), Mat & Ava, Rob, Rod, and Jesse B. enjoyed some political intrigue with good roleplay and then a good combat. Whitewall’s king has been missing for 4 days. Esmarelda is uneasy as are the other inner circle advisors. Queen Verisa pays the heroes of Whitewall their wages, 50,000 gp each. She is 8 months pregnant with the crown prince. She happens to be an elf. A tiefling appears almost out of nowhere. “Hey friend,” he says. He’s wearing fine clothes that are hanging off of him with about 3,000 years of dusty aging and seems not to care. He has been spying on our conversation in a routine and reckless way. His name is Carsh Tarkassis and the more he tries to gain trust the less he is trusted. He seems eager to help but Ruin is highly skeptical, this new guy seems slippery. Regarding the king, whenever questions are asked, members of the inner circle make uncomfortable faces, look away and change the subject. The curious among the heroes begin to quietly dig to learn what they can. Conspiracy theories abound: was King Leonid grabbed by a tentacle and dragged to the Far Realm? Did the orcs of Gorkni kidnap him? Or… dare we think the unthinkable and speculate the king could be dead? No one is saying anything. In the meantime, we are mercenaries with a new boss: Queen Verisa. As far as we are concerned that’s good enough for us. Our marching orders are to go to Gorkni and fight the orcs there. As we near the city we make some basic preparations to not be too obvious about or plans. Kontor encamps his 400 giants some distance away and prepares teleportation circles to bring them close when the time comes. Giants are not easy to hide otherwise. Carsh Tarkassis “befriends” a couple of orc scouts who are then slain anyway by Zuzu and Kontor. Carsh is not pleased, and neither is Esmarelda or Ruin because not only can we not question the scouts, Gorkni will know something is up when they don’t report in. So we will have to attack immediately this night and not in the morning as originally planned. So be it. Just before Ruin blows up Gorkni’s wall with his alchemical charges, B’s ranger makes a ladder out of arrows and Zuzu charges up them. The ranger and the fighter leap from the wall to the tower behind it right before it collapses inward on the enemy behind it. Atop the tower appear to be enemy commanders or dignitaries of some kind and Zuzu is making a beeline for them, right up the tower. On the other side of the wall it is not orcs who await the heroes, but mind flayers. The orcs are effectively their cattle, being bred and herded to fight for them but cattle nonetheless. The mind flayers are gigantic too, not typical and seem to be under the command of the dignitaries on the tower. 100′ or so atop the tower, Zuzu is fighting Dorsain, Dr. Wiley and Crotus. They should be much more than he can handle but he doesn’t care. Kontor summons a huge monster made of chains to join the fight up there but otherwise the party are focused on the mind flayers. The chain monster knocks Dorsain off of the tower and after he lands he is dominated by Carsh Tarkassis. Dr. Wiley and Dorsain are defeated, mind flayers are slain and tentacles from the Far Realm whisk Crotus and the remains of Dorsain and Dr. Wiley away. Zuzu is challenged by a bold orc survivor and defeats him in a single attack. Zuzu’s first act as new Warchief of Gorkni is to replace Gruumsh worship with Kord/Marishten. Yes, Gruumsh is not going to be happy about this! Ruin takes the heroes aside in a confidential meeting and reveals that King Leonid had lost his mind and was decapitated by his own personal guard, to save him from himself and preserve the kingdom of Whitewall. The king’s head has been preserved in a jar. The populous is not to know however. Currently the pregnant Queen Verisa and her advisors rule. Oh, and we’re learning more about Ruin and his strange re-occurances. He was slain by the mind flayers, but a new version of him appears before us bearing his memories and scars, including six black horns on his pale head to represent the mental damage inflicted by the mind flayers, now repaired. Replaced, more like it. But back to matters of the Crown. Succession might not be quite so simple. Esmeralda’s bastard son could contend for the throne in theory and other developments are possible. For now, Whitewall is holding together but it is spread thin across both geography and many alliances, races and powerful armies with huge differences: orcs, elves, giants, wildlings, dragons, dragonborn, humans, heroes, golems. And in Lance’s campaign resurrection is not a routine matter. Enemies without and rumors of intrigue within. Hmm. We are now 19th level and encouraged to make our characters pretty epic, within reason. We each get two +4 magic items. 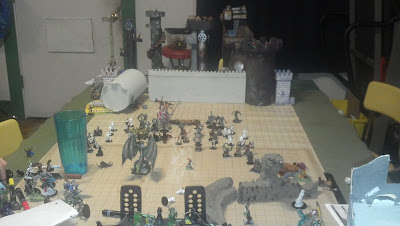